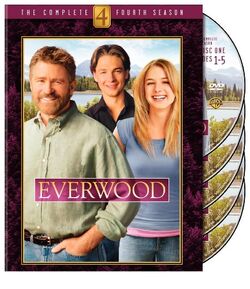 The fourth season opens with Edna and her husband Irv planning a vow-renewal ceremony. Rose is recovering well, and Jake has moved in with Nina. Bright starts his second year at Everwood Community College and has moved into an apartment. A medical student, Reid, has caught Amy's eye, and Amy convinces Bright to let Reid be his roommate. At the request of Delia, who desperately misses him, Ephram returns from Europe in time to attend the end of Irv and Edna's ceremony.

When Ephram returns Andy tells him that he is welcome at home, but he will not pay Ephram's living expenses anywhere else. Ephram tells Andy to apologize for the Madison situation and that Andy "owes" him whatever he wants; their relationship continues to be strained. Andy doesn't want to damage Ephram and Delia's relationship, so he tells Ephram that he will pay him $50 for every dinner they eat together as a family. The plan seems to work, and sometimes Ephram doesn't collect the money at all. Ephram starts his first semester at Everwood Community College with Bright, who asks him to be a third roommate. Reid and Amy date casually. Ephram begins giving piano lessons to a high-school freshman, Kyle Hunter. Although talented, Kyle is sullen and difficult. By helping out Kyle, Ephram gains a new appreciation for what he put his own father through. Also, Andy has a patient who is estranged from his daughter because he kept a secret from her for her whole life. Andy asks Ephram to talk to the daughter about forgiveness, and in the process, Ephram begins to let go of some of the resentment he felt towards Andy and their relationship continues to improve.

On a father/son camping trip with the Abbotts, Ephram reveals that he came back to Everwood because he is still in love with Amy, and Bright reveals that he might break up with Hannah because she doesn't believe in premarital sex. Back in town Ephram asks Reid not to date Amy at all and he backs off. Amy and Ephram repair their friendship. Studying together late one night, they wind up sleeping together. Afterward Ephram, wanting to repair their romantic relationship as well, gives Amy a Christmas present and reveals that he wrote her postcards while in Europe but never sent them to her. She asks to take them home and read them but later explains that she does not want to become romantically involved with Ephram again because she is trying to figure out her own identity.

Harold and Rose struggle to get past her illness. Despite her recovery she loses her re-bid for mayor of Everwood and feels lost and useless. After a vacation on an African safari, Rose tells Harold that she wants to adopt a child.

Nina and Jake's restaurant is doing well. Jake begins acting erratic and distant. When one of his visiting Los Angeles buddies has a serious biking accident, Jake is lost and stressed out. It is revealed that he is a recovering narcotics addict and he has "fallen off the wagon." When he finally tells Nina the truth, she kicks him out of the house and cries in Andy's arms.

Meanwhile, Irv has written a fictional book loosely based on his experiences in Everwood. The book, entitled "A Mountain Town," goes on to be a thundering success.

Although they seem quite mismatched, Bright and Hannah continue to date. Her father finally passes away and Hannah's mother lets her choose to move home or stay in Everwood. Hannah decides to stay. Bright is elated, but he is also frustrated at Hannah's low self-esteem and forces her to see that she is beautiful by locking her in the bathroom and refusing to let her out until she looks at herself in the mirror. Hannah takes it one step further and invites Bright into the shower with her.

Ephram learns that his old piano teacher, Will Cleveland, has died and attends his wake. Instead of a sad and somber event, it is a celebration of his life, and Ephram is introduced to Will's family as his star pupil. They coax him to play a piece, and it rekindles his love of the instrument. He re-buys a piano, and he helps Kyle prepare for a Juilliard audition. Kyle is still moody, and Ephram often returns to the Brown home to talk to Andy about his struggles and practice his own playing. When he convinces Kyle to meet his absentee father and Kyle is stood up, Ephram confesses to Andy that he thinks about his own child all the time and was using his experience with Kyle to work through his feelings of guilt and irresponsibility. Ephram also tries to help develop Kyle's social skills, since he is always alone and awkward around his classmates. When Reid suggests Kyle might be gay, Ephram says he's too young, attempting to shield him from adversity. Kyle initially denies it as well but eventually decides to come out. With their difficulties behind them, Ephram coaches Kyle successfully into Juilliard. After meeting a concert pianist, Ephram decides to transfer to Amy's college and major in music education. In addition Ephram leaves Madison a voice mail, apologizing for his explosive reaction to their situation.

Bright breaks his hand trying to karate chop a piece of wood and wears a sling for several weeks. Hannah babies him incessantly, and they have a minor spat. Hannah obsesses over their relationship, and Bright runs into an old acquaintance, Ada (Kelly Carlson), an attractive blonde who once sold Bright and Ephram fake IDs. After a few beers together, he has a moment of weakness in judgment and lust and winds up sleeping with Ada. Ephram finds out, but Bright, although regretful, decides he isn't going to tell Hannah. Ephram disagrees, and they stop speaking. Amy wheedles the truth out of Ephram and declares that, if Bright doesn't tell Hannah, she will. Under pressure Bright admits the truth, and Hannah breaks up with him. She tells him she doesn't want him in her life at all, even as just a friend.

Reid begins to fail out of medical school and, as a last-ditch effort, cheats on a test. He is caught and expelled but pretends that everything is fine. Ephram finds Reid one morning on the bathroom floor unconscious after having taken an entire bottle of sleeping pills. Ephram feels immense guilt for not realizing that Reid was depressed. Upon recovery Reid again tries to pretend that everything is just fine and asks Amy out on a date. It is predictably a disaster, and Amy tells Reid that she learned from Colin's death that he has to deal with the things that made him try to commit suicide in the first place. Reid decides to move back home with his mother until he is fully recovered.

Harold and Rose's adoption is in the final stages when it is revealed that Harold lied about Rose's cancer on the admission forms. They lose their opportunity and are heartbroken. Rose develops a bruise on her back and convinces herself that her cancer has returned. At the same time, Bright drinks excessively at his 21st birthday party—still hurt by his breakup with Hannah—and stands on a chair at a bar. With his arm in a sling, he loses his balance and falls through a plate glass window. He is rushed to the hospital with a head injury. At the hospital, Rose shares her fears, and Harold tells her that she is fine—the doctor called right before Bright's accident. Subsequently, both Bright and Rose make successful recoveries. A schizophrenic patient of Harold's is overwhelmed with her new baby and the sudden death of her husband. She panics and leaves the baby girl on the Abbotts' doorstep. After a half-hearted search for her, Harold and Rose apply for custody of the baby.

After returning from his book tour, Irv and Edna decide to buy an RV and travel the country. Just after purchasing it, Irv collapses from a second heart attack and dies. Edna maintains her usual, tough persona until Harold confronts her on her erratic behavior. She confesses that she is overwhelmed with grief. Harold and Rose fix up a guest bedroom in their house and invite Edna to live with them, thus ending a years-long battle between mother and son.

Nina agrees to forgive Jake and to take him back, and he begins a variety of recovery programs but is unsurprised when none of them work since they didn't in the past. He decides to start a recovery group in Everwood and then begins to design a program on his own. His old friends in Los Angeles are receptive to the idea, but they want him to move back. Jake asks Nina to come with him, and she sells her house and agrees. Andy—faced with the loss of Nina—impulsively buys her an engagement ring and shows it to Ephram, saying he simply needed to act on his feelings, even if he had no intention of asking her. At Irv's funeral Ephram tells Nina about the ring, who tells Hannah, who convinces Nina to sneak in and look at it. Hannah ends up with the ring in her room, and Jake finds it while packing. He confronts Andy and Nina, and the latter insists that it means nothing. They make it to the airport when Jake realizes that he doesn't want to be with someone who is so unsure and boards the plane alone. Nina shows up back at the Browns—a sleeping Sam in tow—as her house has already been sold. Andy takes a cathartic trip to New York to say goodbye to his late wife Julia one last time before flying back to Everwood to propose to Nina on the very spot they met. She happily agrees.

Ephram meets Stephanie while hanging ads for a new roommate. She is feisty and fun without drama; Ephram likes how refreshingly easy she is to be around. Delia invites her to her bat mitzvah, and while there a slightly tipsy Amy realizes she is still in love with Ephram. She struggles with this realization until she thinks of the exact best way to tell Ephram how she feels. Recreating a moment they shared during a festival soon after he first moved there, she enlists Rose's help in ordering a Ferris wheel, stationing it outside his apartment. With this as her backdrop, she confesses that all their problems are her fault and asks him to give her another chance at a relationship, without the drama. Ephram, having loved Amy since the day he met her, easily agrees to be with her again, and the season and series end with Ephram and Amy embarking on a mature, adult relationship.

On May 17, 2006 The WB confirmed that Everwood has been cancelled and had a remainder of three episodes left to shoot. It was later confirmed that the series finale would air June 5, 2006, before merging from WB/UPN into The CW Network.

Retrieved from "https://everwood.fandom.com/wiki/Season_4?oldid=5654"
Community content is available under CC-BY-SA unless otherwise noted.