Everwood is an American drama television series that initially aired in the United States on The WB ran from September 16, 2002 to June 5, 2006 for only four seasons. The series is set in the fictional small town of Everwood, Colorado, and was filmed in Ogden, South Salt Lake, Draper, Utah, and Park City, Utah except the series pilot which was filmed in Canmore, Alberta, Denver, Colorado and Calgary. It is primarily a drama with some comedic moments. The series also stars Treat Williams, Gregory Smith, Vivien Cardone, Emily VanCamp, Chris Pratt, Tom Amandes, Debra Mooney and John Beasley.

On May 17, 2006 the series was cancelled and not renewed for future production when The WB and UPN merged to form The CW Television Network.

When Manhattan surgeon Andrew Brown is widowed, he decides to start a new life in the idyllic Colorado town Everwood, but it takes an eternity for a city-boy to fit in the small community, which already had a physician, and it's even worse for his kids: Ephram, a sensitive kid and gifted pianist, and his little sister Delia. As they get to know people better, relationships develop and change.

The series begins with the arrival of Dr. Andrew "Andy" Brown (Treat Williams), a widower who leaves his successful job as a top Manhattan neurosurgeon to live in a small Colorado town, bringing his 9-year-old daughter Delia (Vivien Cardone) and 15-year-old son Ephram (Gregory Smith) with him. He chooses the town of Everwood because his late wife had told him of her emotional attachment to the town. Many of the story lines revolve around settling into a new town, dealing with the death of the mother and wife of the family, and the growing relationship between Andy and his son, who did not interact much in New York, due to the demands of Andy's job. Andy at first finds some conflict with Dr. Harold Abbott (Tom Amandes), with whom his professional opinions differ. However, Harold's cranky demeanor and Andy's passive, cheerful attitude prove to mesh well, and the two begin a friendly rivalry. Ephram continually struggles with his emerging adolescence, his studies as a classical pianist, and his crush on Amy (Emily VanCamp), Harold's daughter.

The first season revolves around the main storyline involving Colin Hart (Mike Erwin), Amy's boyfriend and older brother Bright's (Chris Pratt) best friend. Amy sees the arrival of Andy as an opportunity: Colin has been in a coma since July 4 of the previous summer, after Bright and he were in a car accident. Amy befriends Ephram in an effort to convince Andy to revive his neurosurgeon skills to save Colin. Andy reluctantly agrees. Amy is elated, but Bright is sullen and distant about the situation. Later, he tearfully confesses to his father that—contrary to what he had claimed all summer—he does in fact remember the accident: He was the one driving Colin's father's truck and the two boys were drunk at the time. His anguish is relieved when Andy is successful, and soon Colin is awake.

The final episode, "Foreverwood," was written as both a season and a series finale. Because of the impending WB/UPN merger into the CW Television Network, the future of the series was uncertain, and the producers wrote two endings: the aired version, as well as additional scenes where Madison showed up to cause some cliffhanger trouble. Originally, the producers had scripted a montage for the "series-finale cut" that went forty years into the future to show a majority of the gang at Andy's funeral — showing the series coming full circle; this was never filmed due to budgetary reasons as well as the producers' hopes that they would receive a fifth season.

On May 17, 2006 The WB announced that they will not be returning Everwood for a fifth season.

Everwood aired only 4 seasons and a total of 89 episodes were made and the series with a two-hour part finale.

In Region 4, Warner Home Video has released the first season on DVD in Australia.

On October 2, 2006, reruns of Everwood aired weeknights on ABC Family for the duration of the series. In Canada, reruns are shown Tuesday evenings at 7 EST on VisionTV. In the United Kingdom, reruns are currently being aired on E4 every weekday at 8:00am and 12:00 noon. Everwood is now available on the CW Seed for the duration series.

Robert Bianco for USA Today was not enthusiastic about the show's premiere and gave it a two-star rating out of four. He found that Everwood's main problem was that it "never knows when the corn syrup is thick enough" due to its clichés. On the more positive side, he wrote, "Clearly, WB's goal here is to find an acceptable time-period companion for 7th Heaven, and it's entirely possible the network has. The scenery is pretty, Smith has the earmarks of a star in the making, and Williams actually is quite appealing — when the script isn't forcing him to behave as if he were insane."

Advocacy group the Parents Television Council ranked Everwood as the group's No. 1 "worst network TV show for family viewing" on their list of the 2003−04 season. The PTC criticized "the careless and irresponsible treatment of sexual issues – especially when the teenaged characters are involved" and stated "Everwood's reckless messages about sex without consequences are expressly targeted to impressionable teens." Entertainment Weekly reviewed positively the show's third season in 2005 giving it an "A-" and commented, "Everwood's soap tropes — unexpected pregnancy, adultery — handles these stories artfully."

In 2003, TV Guide named Everwood "The Best Show You're Not Watching".

Treat Williams has also received two Screen Actors Guild award nominations in 2003 and 2004 for his role as Dr. Andy Brown. 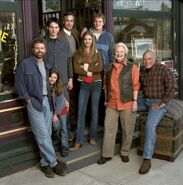 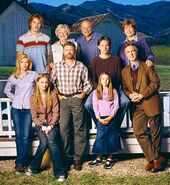 Retrieved from "https://everwood.fandom.com/wiki/Everwood?oldid=5774"
Community content is available under CC-BY-SA unless otherwise noted.